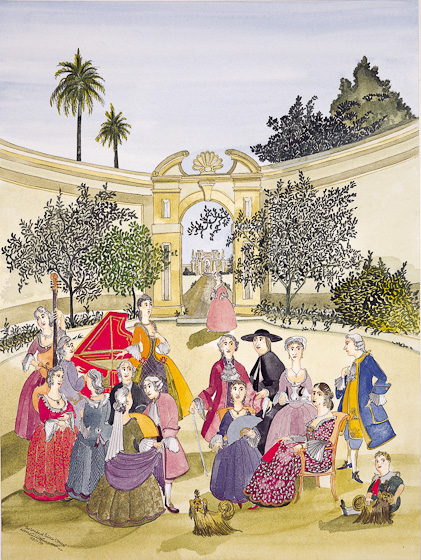 “The Age of Elegance” A watercolour by Kenneth Zammit Tabona, depicts Palazzo D’Aurel in Gudja. The artist has recreated a possible scene in which the lords and ladies of the Palazzo are enjoying an informal concert in the main courtyard.

This imposing Palazzo, is known to be built in 1720 during the Order of St.John by Count Ignatius Francesco Moscati Falsoni Navarra (also known as The Count Of Bahrija). Built in a Palladian style architecture, inspired by the designs of the Venetian architect Andrea Palladio (1508–1580), this Palazzo was meant to serve as a family home and country residence.

Later on, the Count of Bahrija decided to leave Gudja, and the Palazzo was bought by Pietro Paolo Falzon d’Aurel, to endow his daughter Marchesa Lady Elizabetta Testaferrata D’Aurel (known as Bettina) who got married to Dr. Diego Moscati (Marchese di Xrobb-il Ghagin) in the year 1760.

That is where Palazzo Dorell earned its renowned name, especially since Lady Bettina applied the artistic knowledge she acquired in Naples to decorate this outstanding residence herself. 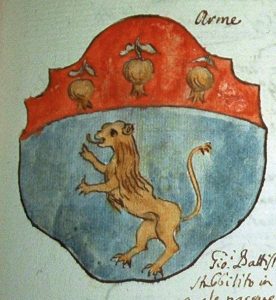 The Aristocratic D’Aurel family had a number of other notable properties on the island. Palazzo Dorell should not be confused with Palazzo Bettina in Birgu nor Casa Dorell in Valletta, which both belonged to the same family.

Years later the Palazzo served as headquarters for British forces, under General Graham, during the French blockade (1798-1800). In the enclosed private garden, one can still find a small cemetery where British army men who died during the French occupation are buried.

The Palazzo is a two-storey structure, flanked by a one-storey wing on either side, divided into bays by means of plain pilasters. Adorned with balustrades and spherical stone ornaments. As previously mentioned, the Palazzo was built in a Palladian style inspired design, and this totally reflects in the symmetrical, almost rigid façade, set back from street level by means of a large forecourt.

The arched doorway is reached through a flight of steps and adorned with decorated corbels, supporting the overlying balcony. The balcony’s and all first-floor level apertures are all aligned symmetrically with the ones at ground floor level.

The gate in the forecourt has a semi-circular headed portal, flanked by two smaller flat-headed doorways, and surmounted by spherical ornaments similar to those on the wings of the main building. At the back of the Palazzo there is an open, wall enclosed courtyard with an archway that centres on a temple-like building at the far end.

The Xlejli Tower stands in the gardens of Palazzo Dorell. The age of the tower is not known, it could date back to Roman or medieval periods.

According to Louis de Boisgelin, the historian of the Order of St. John, an urn full of Roman copper medals was found at the tower. The tower also has a round shape, similar to other Punic-Roman towers in Malta. 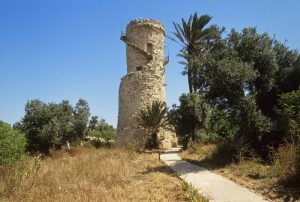 The oldest reference to the tower dates back to 1570. It was described as a lookout tower built in the 12th or 13th century. The tower was almost definitely built as a watchtower, since it has views of the southern part of Malta, stretching from Benghajsa to the Grand Harbour.

Palazzo Dorell was built years later close to the tower, and the latter was included in its grounds within a large walled garden. Since then, the tower has been closed for the public.

Lady Bettina took pride in restoring the tower and decorating its interior. Due to this, it also became known as Bettina Tower after her. She had actually named it as Xulliela Tower, which has a literal meaning of “tacked together” in old Maltese.

The tower consists of three rooms on top of each other, with access through an external spiral staircase. 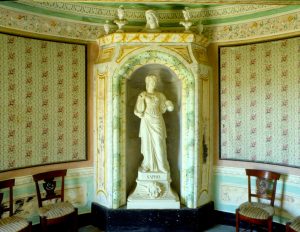 The lowest room on first floor is decorated in a neo-classical taste. Walls all adorned with Chintz, two plaster figures of Sapho (a greek poet) and Vesta (roman goddess), facing each other across the room. In the middle of the room, one finds an empty plinth upon which once stood a third statue, that was shattered by a bomb blast during the war.

The room on the middle floor is dominated by a large circular table, covered with a Chintz cloth, and small benches set against the painted walls. 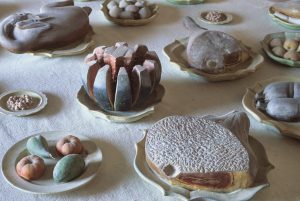 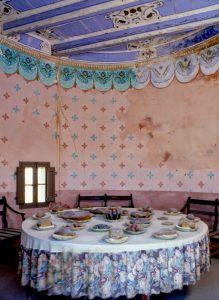 The top room is empty except for an elderly telescope on its stand. The walls are wonderfully painted in oil on plaster, an imaginary landscape filled with strange buildings, cities and villages. Although not alien to Maltese landscape, it bears no direct geological relation to the surrounding countryside. Unfortunately, the artist is unknown. 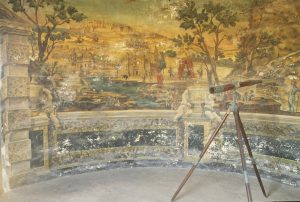 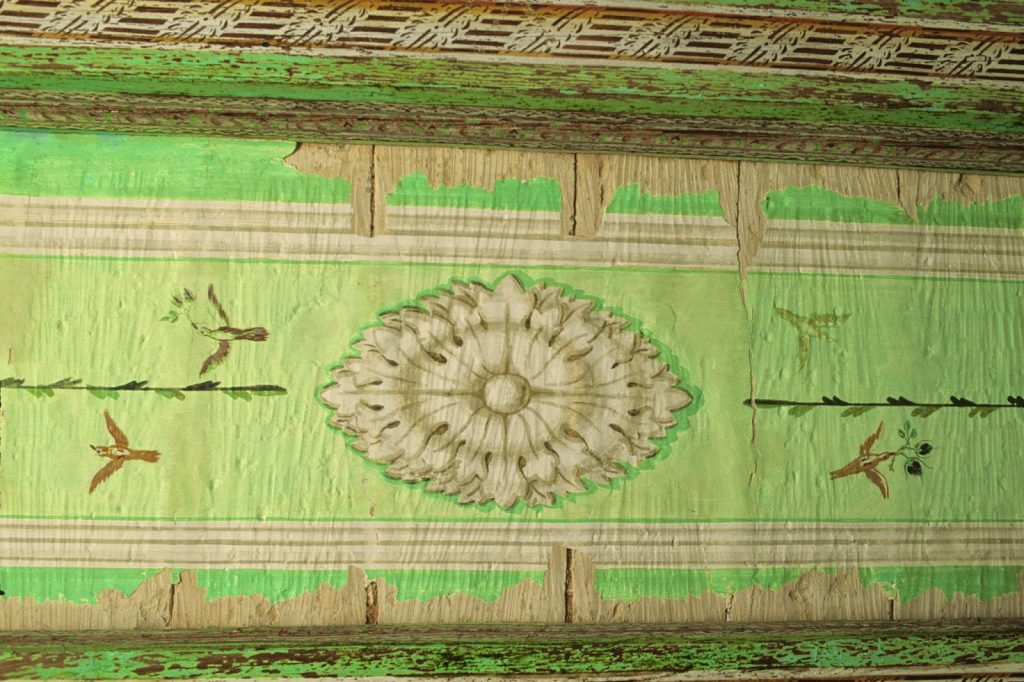 The beams of all the ceilings in the tower are beautifully and delicately painted with bands and garlands.

Marquise Bettina D’Aurel had been a lady in waiting to the Queen of Naples, and therefore a woman of considerable social consequence on the island. It is said that she was much given to entertaining a number of guests at her residence.

“She began to lead a life of gaiety and merry-making. She kept no female servants, and only men were allowed to enter her house.”

Cassar Pullicino in his publication The Order Of St.John In Maltese Folk Memory 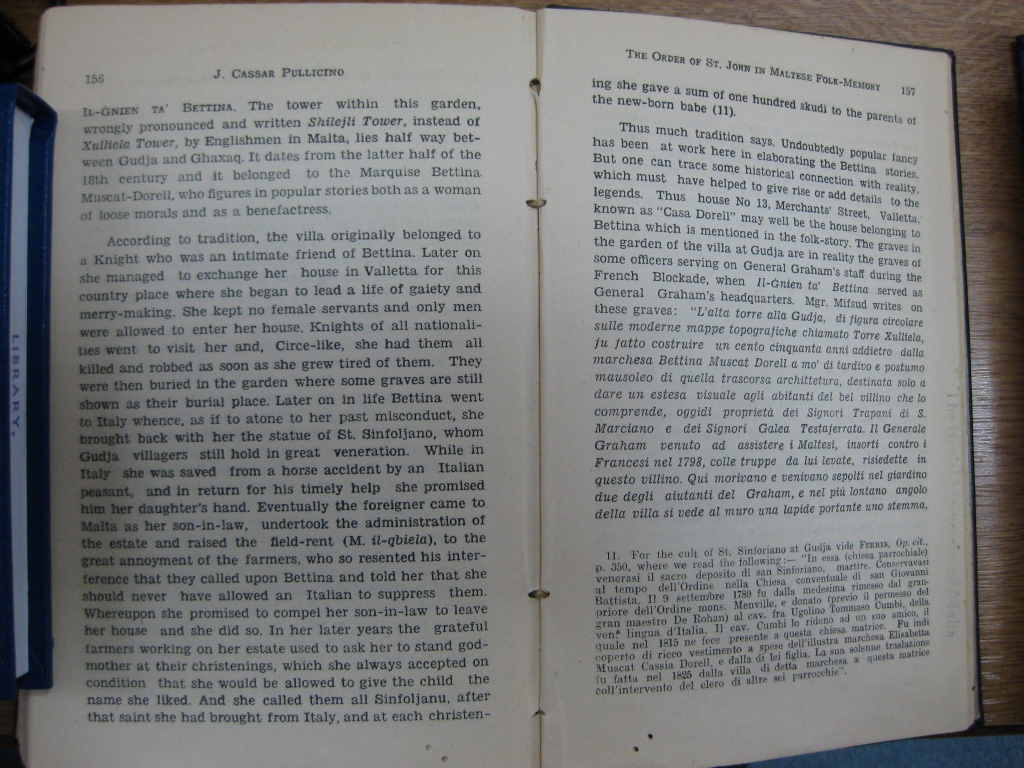 Today, this outstanding Palazzo serves as a private residence to the Barons of San Marciano. Presently home for Baron Gino Trapani Galea Feriol. The structure is scheduled as a grade 1 property by the MEPA. It is also listed on the National Inventory of the Cultural Property of the Maltese Islands.