By Old Houses Malta | The Features

We all have seen the grand arrogant style which leaves you delighted and dazzled. In this post we take a step back and dive deeper to understand the signature that baroque architecture left on Maltese houses.

What is Baroque Architecture?

In Spanish “barroco” meant an imperfect pearl. Nowadays the word baroque is a synonym for the extravagant, abnormal and irregular artistic style. The baroque style originated in Rome and was adopted by the catholic church. This quickly started spreading through the Roman Catholic countries, as you can imagine Malta was among them.

Prior to Baroque, the predominant style in Malta was the ‘Mannerist Architecture’. This is a variant of Renaissance Architecture.

The Baroque architecture originated in the 17th Century. Shortly after its introduction, Bolognese Engineer Vittorio Bontadini, also known as Bontadino De Bontadini, designed the Wignacourt Arch. Unfortunately, during the second world war the Arch was knocked down. A Royal Air Force breakdown lorry struck it and demolished most of its Ħamrun-facing façade. Back in October 2012, the planning authority issued a permit for the construction of a replica of the historic arch. 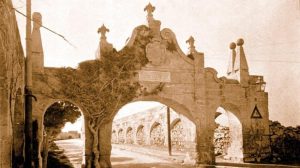 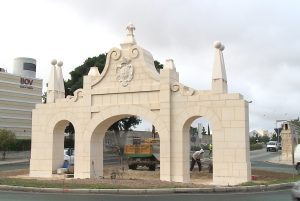 This style became more popular after Francesco Buoanamici designed the Jesuits Church in Valletta 1635. Most Baroque buildings in Malta were influenced by French and Italian Baroque. Also a few characteristics of Spanish Baroque. Early projects of Maltese Baroque buildings are:

Baroque features were used to redecorate and reconstruct some of the existing churches. Some of these features include the large domes and dominant belfires. One of the most influential Baroque Architect at the time was Lorenzo Gafá. Gafá’s most renowned masterpiece is St.Paul’s Cathedral in Mdina, which was rebuilt between 1696 and 1705. Yep… rebuilt. The Sicily earthquake severely damaged the original medieval cathedral.

Around 1693 there was an earthquake which we will simply refer to as the Sicily earthquake. This earth quake also affected Malta, especially Mdina. Many mediaeval buildings in the affected areas were severely damaged. In fact, in 1722 Grand Master Antonio Manuel De Vilhena rebuilt most of the buildings in Mdina. Being the 18th Century the new building had several baroque elements. They included the: Main Gate (1724), the Portal of Greeks (1724), the Torre Dello Standardo (1725) and the Corte Capitanale (1726-28). Read more about it here.

The Baroque Architecture symbolized prestige, power, and wealth. The nobles started using Baroque to show their wealth and status. These features were then borrowed by humbler home owners. They used Baroque for their doors or balcony corbels (support). This style remains popular to this very day.

Today, baroque still dominates most of our prominent townhouses, churches and palaces. Baroque is the style which screams out “look at me, I’m an elaborate, complex and grandeur type of architecture, which will leave you dazzled”.